An Example of Misdirection and Complacency in the Mining Industry

We had become complacent. Even though we replaced ¼” LEXAN™ polycarbonate daily, we always thought LEXAN™ was unbreakable…”

In August of 2015 a near miss occurred at an aggregate mine in eastern North Carolina. A ½ lb. piece of hammer steel sheared oﬀ the tool of a 16,000-lb. hydraulic hammer. Traveling between 240 and 400 MPH the projectile pierced a 1/4“polycarbonate sheet designed to protect the windshield from damage. 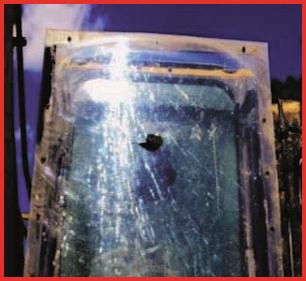 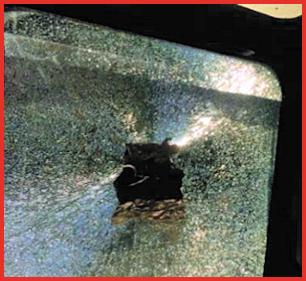 The projectile continued through the windshield and out the back glass of the excavator, landing approximately 60 yards behind the machine. The projectile missed the operator by inches, covering him with broken polycarbonate and shattered glass. A fatality would have been recorded if he had been stuck. The misdirection in this incident was focusing on protecting the windshield instead of the operator. The complacency was thinking a ¼” sheet of polycarbonate, which was always thought to be unbreakable, was capable of stopping a ½ lb. piece of hammer steel traveling between 240 and 400 MPH.

As a result of this near-miss, Equipment Armor, Inc. developed and patented the Equipment Armor Shield and Frame Package. The shield was a culmination of two years of product testing working with various types of polycarbonate, coatings, sealants, and assembly methods and materials. The Equipment Armor shield is a composite shield consisting of high optic polycarbonate utilizing a protective hard coating.
INITIAL 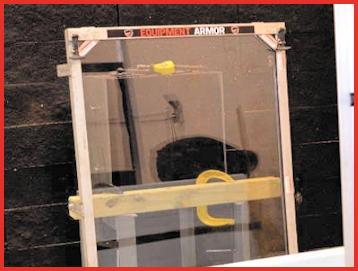 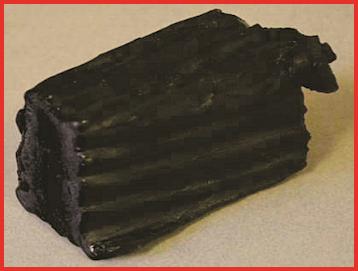 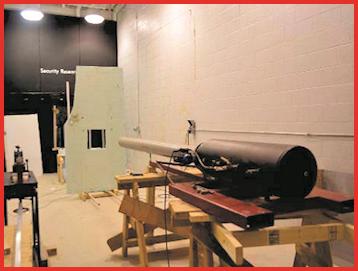 The conguration of the Shield was showing promise, but there were too many unknowns. We had to replicate what happened in the quarry…”

In March of 2016 initial testing was done on the shield at York, PA based Intertek Laboratories, a specialist in ballistic testing for government and private industries on a global basis. Their engineers built an air cannon designed to shoot a ½” piece of hammer steel at the Equipment Armor Shield. The ballistic test for Equipment Armor consisted of shooting two separate shields. Shield #1 was shot four times from speeds of 175 mph to 276 mph. Shield #2 was shot 5 times at speeds of 175 mph to 300 mph. The Equipment Armor shields' design and construction was validated through this process oﬀering protection to operators of hydraulic hammers from projectiles traveling up to 300 MPH.

WHERE WE ARE TODAY:

Tim and Jamie Nickodemus started Fleet Glass in 1996, initially working as a MSHA Part 46 vendor to local quarries around the Raleigh, North Carolina area. In 2010 with the opening of their Charlotte Branch of Fleet Glass, they became an MSHA Part 48 Vendor working throughout North and South Carolina. In 2015, due to a near miss in the mining industry, Tim developed the Equipment Armor Shield offering ballistic rated guarding to the mining industry. They have actively served the Mining and Heavy Equipment/Heavy Construction industry for the past 22 years.

Prior to Fleet Glass, Tim worked in manufacturing, heavy construction, and the food service industry. Tim Received his Bachelor (1981) and Master of Business Administration (1986) from Western Michigan University, and a Master of Theology (1996) from Southeastern Seminary in Wake Forest. Tim is an MSHA Certified Part 48 Safety Instructor, maintains a National Safety Council First Aid Instructor Certificate, and is a licensed North Carolina Commercial General Contractor.

Jamie Nickodemus received her Bachelor of Business Administration from Western Michigan University in 1982. She grew up in a family with deep roots in the Heavy Construction/Road Building Industry. Her grand father, Lee Brown, started Brown Brothers, Inc., the family construction company in 1954 working as a sub-contractor on the Mackinaw Bridge. Over the next 30 years Brown Brothers developed into one of the largest road and bridge building companies in the mid-west. In the summer of 1980, Jamie started as a laborer for her grandfathers company and the following summer became a licensed union loader operator for Operating Engineers Local 324. As the company grew Jamie later took over various accounting functions and was promoted to CFO in 1986. Brown Brothers maintained offices in Lansing, Michigan and Orlando, Florida. Jamie was involved with the companies road and bridge building projects, asphalt and concrete plants, and sand mines until the close of the business in 1991.